Kettleton Byre with the kids

My youngest daughter, Alligin, does not so much ask for things as make demands. ‘Dad, when are we going to a bothy again?’ was her refrain for some of this winter, so the arrival of the school break made my thoughts turn optimistically to exploring some bothies in the Southern Uplands of Scotland, rather than my usual haunts in the Highlands. Wilf, her twin brother who will be joining Beavers soon also makes requests to go ‘campfing’ and dons my hat, floppy, ridiculous when he wants to be an explorer/adventurer.

Kettleton Byre has always had the look of a well-appointed bothy in photos and articles I’ve seen about it and some discussion with Bert, a member of Galloway MRT and trainee ML, on a recent course made me confident it was going to be a good bothy to visit with the kids. Several of the bothies in the Southern Uplands lie on, or very close, to the Southern Upland Way, are really close to the road-end and near bigger towns and thus get a lot of use. The tent did come with me as a back-up plan, as was fleeing back to Edinburgh in the car if circumstances demanded it.

We arrived at Durisdeer, which is only about 3 km from the bothy, and got kitted up for the walk in. The youngsters were much taken with the lambs, which were also among the reasons that Shadow the dog did not come with us. 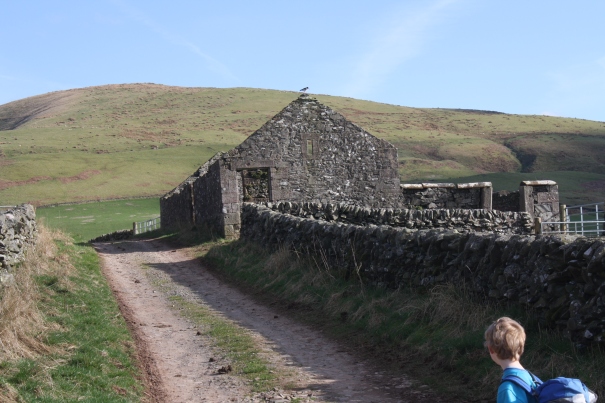 Wilf encounters and old building with an oystercatcher perching on the gable end just outside Durisdeer.

The bothy is very well-kitted out, with an enclosed stove, chairs, sleeping platforms and  wood-store. And a shovel, with helpful labelling for the uninitiated.

Jenna and Alligin inspect the shovel at Kettleton Byre, maintained by the Mountain Bothies Association

The walk in is fairly straightforward, although I was harbouring hopes of taking in some tops at some point over the weekend. Good visibility and a wide-range of human and natural features let me do some navigation coaching for Jenna on the way in. She’s off to Benmore later this year and wants to improve her skills before the trip. We made it up to the bothy to find ourselves the first and, as it turned out, only party for the night. We dropped our packs and went for an explore further along to the track junction that could take us up onto the ridgeline the next day if the kids were willing. 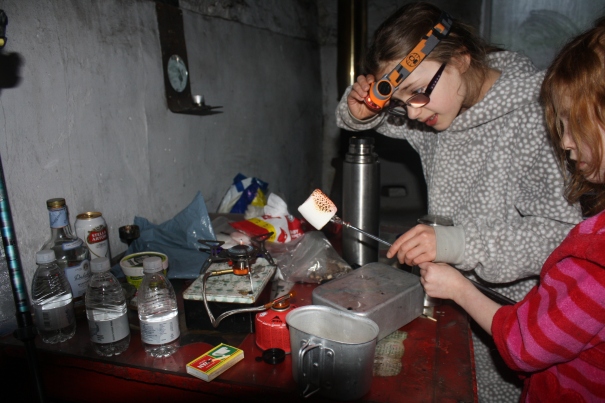 We got back to the bothy to get the tea on and I just about managed to get sufficient calories into the kids and myself and then started on the sleeping arrangements. As with any night at home, these started out with a plan – a plan that did not survive contact with the enemy. I will draw a veil over these events by saying that it is a good idea to have synthetic sleeping bags for your younger children. I ended up sleeping in my group shelter in my belay jacket to deal with the ‘incidents’.

I did have a couple of wee forays out to enjoy the solitude and stars and heard a snipe ‘drumming’ it’s feathers as part of their famous display, which I’ve never heard before. During the daylight hours we were also able to see several red kites.

Before the off the next morning.

Alligin was not for the tops the next day, so we packed up and made our way back to the car. I made a brief stop at Wanlockhead and Leadhills to try and inspire the weans with tales of mining and geology but the main interest among them was in food, so the trusty tin of Pringles was bought from the Leadhills shop in and then we headed home.

I did plot out a route (https://www.plotaroute.com/route/386124) for doing a hill round taking in the bothy but that is going to be for another time.