Wintery conditions have finally arrived in the lower hills in the Central Belt of Scotland. In the Pentlands the snow is lying but azure polar skies and mists as the sun gains strength afforded some spectacular views today while I was out taking some additional photographs for Lothian and Borders Geoconservation Group (LBGC), a subcommittee of Edinburgh Geological Society, in relation to the Bavelaw Local Geodiversity site. 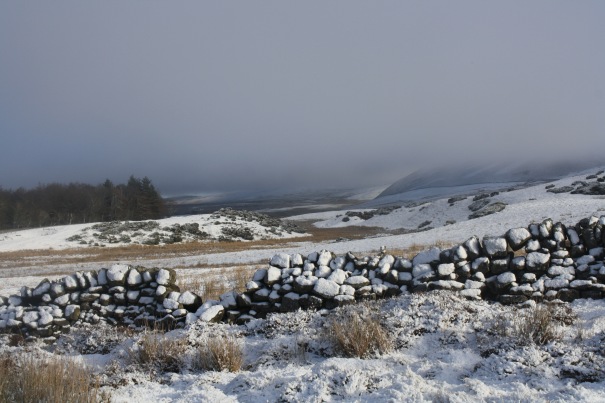 Bavelaw showing the glacial melwater channel snaking through the landscape

One of the main roles of LBGC is supporting the councils in the Lothian and Borders in making the case for including geodiversity sites in their range of local nature conservation sites.  Geodiversity encompasses the non-living components of the natural world. As well as being valuable and of interest in its own right, geodiversity plays a major role in sustaining biodiversity by providing the substrate of energy and nutrient flows that living organisms rely upon. Plants have the most direct link to the geodiversity, as soil types can partly determine which vegetation communities can exist in a particular place. However, even humans are ultimately constrained by geodiversity too. Will Durant put it succinctly, ‘Civilization exists by geological consent, subject to change without notice.’