Finishing off at Diabeg, summer 1996

One of the long, long jobs we did in Torridon was the path between Upper Diagbeg and Craig. This route continues on to Redpoint along the road from Gairloch but we only worked on the path as far as the then SYHA Hostel at Craig, where we were based part of the time. The building is now a bothy maintained by the Mountain Bothies Association and is a free, basic open shelter for walkers. 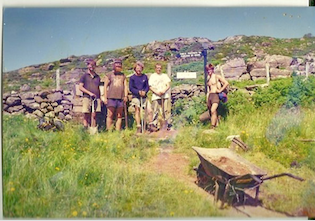 We worked on the path in 1995 and 1996 and it was probably the most technical of the routes we worked on. In addition to the routine work of surfacing, ditching and building water bars, we put in at least on revetment. We also had helicopter support to move cobbles for the base of the path where we were laying geotextiles to cross the stretches of deep peat. We dug a few single boots out of those stretches of peat, making you wonder how the person who lost it got on with the rest of their walk. We also used rock saws where appropriate to create features where the path crossed bedrock.

I think nearly everyone I ever worked with in Team 06 was involved over the course of the job. Iain, Tom, Scoot (team leader), Geezer, Canadian Mike, DJ and Wolfie all took part. Maybe Mick Kubota (an SCP mini-digger driver who supported us on other jobs) wasn’t on this one. Our mobile supervisors, Martin and Owen, also both spent time on the site with us.