This tour visits some central Edinburgh locations with links to Hugh Miller, mixing historical sites with a chance to view some examples of the fossil fish he studied during his life, which are serendipitously located in paving slabs outside the National Museums of Scotland. 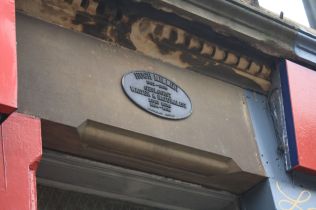 Route: The tour leaves from the building that is now the City Chambers, where there is a plaque commemorating Miller’s work on this site as editor of ‘The Witness”. From here, the tour goes southwards to Chambers Street, where numerous examples of Devonian fossil fish from NE Scotland can be found in paving slabs outside the National Museum of Scotland. Many of Miller’s 6000+ fossil specimens are held by the NMS and some are on display in the public galleries, while other materials are held in the research collections. From Chambers Street, there is a longer but pleasant walk across The Meadows to the Grange Cemetery, where Miller is buried. 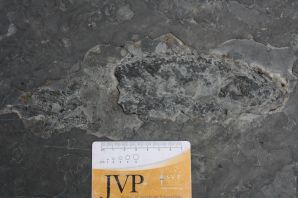 An interesting aside in the Grange Cemetery is the grave of Charles Maclearn, the founder and editor of The Scotsman newspaper. Maclearn, who had a serious interest in geology, has a place in the history of geology in Scotland. When Louis Agassiz interpreted the striae on rock surfaces in Blackford Glen as having a glacial origin, Maclearn reported in the Scotsman that his words were, ‘That is the work of ice!’

Distance and difficulty: 2.5 km, including final walk back to main road from Grange Cemetery on pavements and paths.

Hugh Miller (1802–1856), from Cromarty in the Black Isle to the north of Inverness, made a number of significant contributions to geology, palaeontology and natural history. At a time when “scientist” was a novel word, let alone a career path, much of Miller’s geological and palaeontological output was initially published in newspaper articles and pamphlets. From 1840 onwards he was the editor of The Witness newspaper in Edinburgh.

His lasting contribution is his palaeontological work on the fossil fish that he collected and described from the Old Red Sandstone (Devonian Period, 390-360 million years ago) and the sedimentary rocks that preserved them. When Miller went to the British Association for the Advancement of Science meeting in Glasgow in September 1840, he realized that some of his fossil finds overturned current ideas and this galvanised him into producing The Old Red Sandstone: New Walks in an Old Field.

Miller travelled widely across Scotland as a stonemason, which brought him to the environs of Edinburgh in 1823. He worked as a mason at Niddre-Marischall House for ten months and lived in the nearby village of Niddry Mill. This allowed him opportunities to study Carboniferous rocks (360–290 million years). He returned to Edinburgh in 1840 and lived in various places, including Marchmont and Jock’s Lodge, before moving to Shrub Mount in Portobello, where he established his private museum. He died here in 1856 from a self-inflicted gunshot wound to the chest. He is buried in the Grange Cemetery in the Grange area of Edinburgh.

Modern stonemasonry combines the artisan craft skills of Miller’s day, which stretch back deep into human history, with scientific approaches typified in Scotland by the work of the Scottish Lime Centre Trust and Historic Environment Scotland. The Zippia site gives some more universal insights into the career path of a modern stonemason.

Like Loading...
Al is a Hill and Moorland Leader and has also completed the Expedition Skills module