Home › Pentlands › Castlelaw Hill. So hilly they named it twice

Castlelaw Hill. So hilly they named it twice

Castlelaw Hill is one of the more accessible peaks in the Pentlands, for reasons both ancient and modern. The ancient reason is that there is an earth house (aka souterrain) within a series of defensive ramparts and ditches. 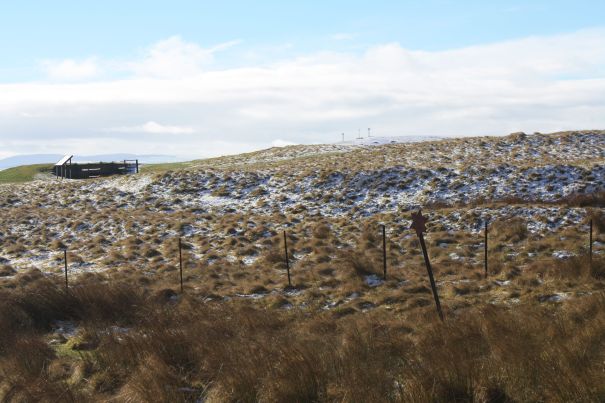 The earth house on Castlelaw Hill. The entrance is on the left of shot.

One modern reason is that there is road up to within about 200 m of this site and a car park that serves this  Scheduled Monument. The excellent Pastmap system directs you to more detailed information on the site. You can enter the underground lair but that was not on the agenda for today

However, beyond the car park, there is a hill track, as the area is a military training area. So Shadow the dog and I were able to take a wander up to the summit among a dusting of snow on a morning with great visibility.

As we gained height, the extensive rig (ridge) and furrow systems around Woodhouselee were very obvious in the oblique sunlight and dusting of snow. The curve of the system is suggestive that these were worked by oxen rather than horse-drawn ploughing but I could be wrong.

Rig and furrow at Woodhouselee

We topped out with fine views further into the main Pentland ridge before heading back down the hill.

Castlelaw is mostly underlain by of rhyolitic lavas (lavas with the same composition as granite but with much finer grain-size as they cooled rapidly) which gives rise to acid soils and the hill has noticeably more heather than the hills to the south.

Below Turnhouse Hill, the Battle of Rullion Green took place on 28/11/1666, can be seen in these photos. Robert Louis Stevenson’s essay ‘The Pentland Rising: A page of history 1666’ provides a short introduction to this hour of Scotland’s ‘Killing Times‘. 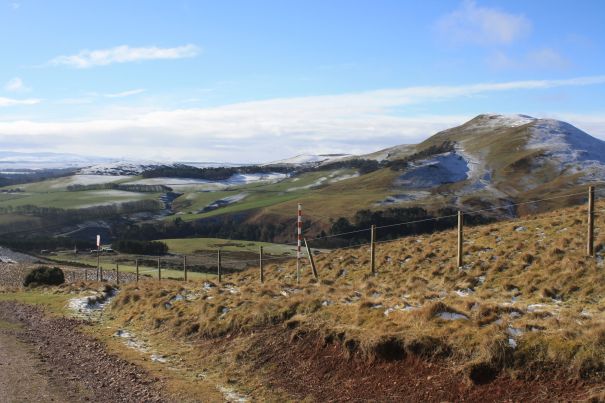 The sweep of the battlefield of Rullion Green in the distance

So, why is Castlelaw Hill named twice? Well, ‘law’ is derived from Anglo-Saxon hlāw meaning a (grave) mound. So the formation does smack of ‘Castlehill Hill’ or, if one is feeling generous, the less sonorous ‘Castlemound Hill’.

One comment on “Castlelaw Hill. So hilly they named it twice”